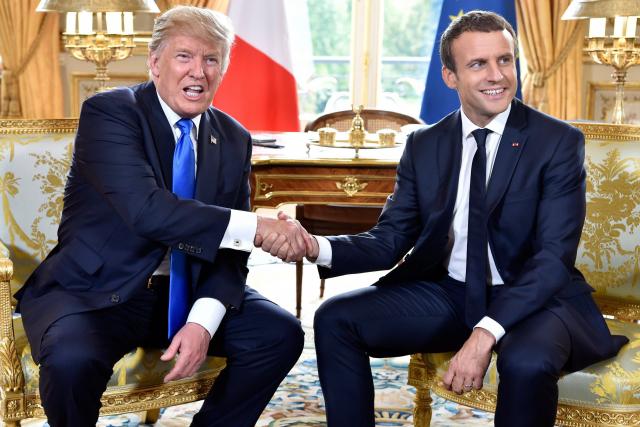 Trump is in Paris on his first official visit to celebrate Bastille Day with an increasingly influential world leader, France’s new president, At 39, Emmanuel Macron is the youngest French president with unexpected political dexterity, he abruptly changed the face of French politics. He’s also become a rising star on the global stage and is already seen as a fulcrum and leader of the West, alongside German Chancellor Angela Merkel.

In less than two months, Macron will have hosted two of the world’s most controversial leaders, Putin and Trump. these bilateral meetings were generally perceived as successful diplomatic ‘coup’ signaling that France is back on the diplomatic scene.

The two men have been sitting for extended talks on security matters, including the civil war in Syria and counterterrorism efforts. Earlier, they toured France’s national military museum and Napoleon’s tomb at Les Invalides.

Donald Trump was treated to a grand display of French splendor in the courtyard of Les Invalides military complex earlier : a brass band to play the national anthem, a full review of troops, a warm handshake from Macron, France’s charismatic new leader.

Trump said the US and France face “grave threats from terrorist organizations that wage war on innocent lives,” but said the countries “stand united against these enemies of humanity.”

“It’s going to be just fine because you have a great president,” Trump said while standing alongside French President Emmanuel Macron. “You have someone who’s going to run this country right.”

Trump called Macron “a tough president” who is “not going to be easy on people who are breaking laws.”

But he warned Macron that both their reputations are on the line. “You’ve gotta do a good job please or you’re going to make me look bad,” he said.

He called Paris “peaceful” and “beautiful,”.

Trump and Macron talked about the Paris climate deal

France’s president said the two leaders talked about the issue they don’t agree on: the Paris accord. Trump pulled out of the historic climate deal recently. Macron kept his comments on this very brief, saying only that Trump was delivering on his campaign promises. The new French leader wants to make clear that despite sharp differences over climate and trade, and global outlook, the alliance between France and the US is vital for the good of the international order.

“We want to stress the importance of the enduring French-US relationship whatever current disagreements there might be at present,”. For his part, Macron said he remained committed to the climate agreement, and would continue urging Trump to reconsider.
“I think that it is important that we can continue to talk about it,” he said. 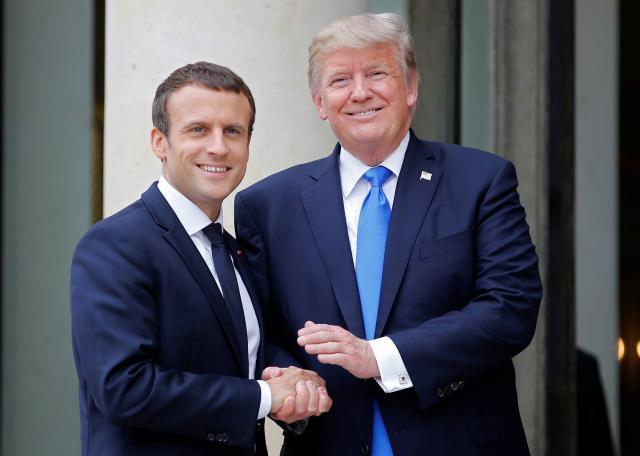 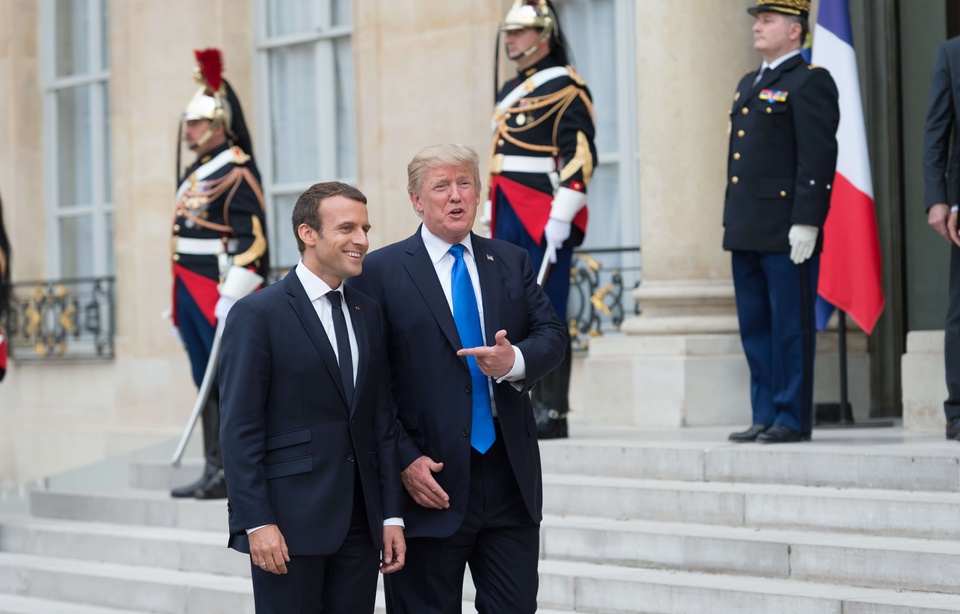 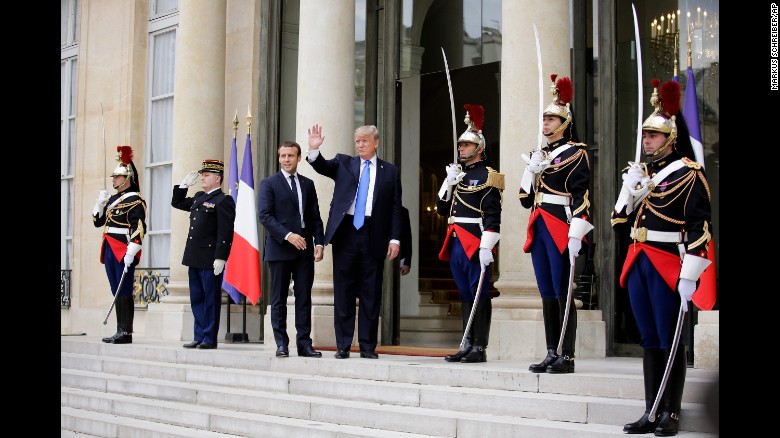 Trump’s stop in Paris is designed to mark the 100th anniversary of the United States’ entry into World War I, and the security theme will carry over in talks between the leaders, which the White House said would center on Syria and counterterrorism efforts.
Macron hopes to demonstrate to Trump the willingness of France to play a broader role in global security affairs. The country is the second largest contributor to the US-led anti-ISIS coalition, a permanent member of the UN Security Council, and a key actor in counterterrorism efforts in northern Africa. 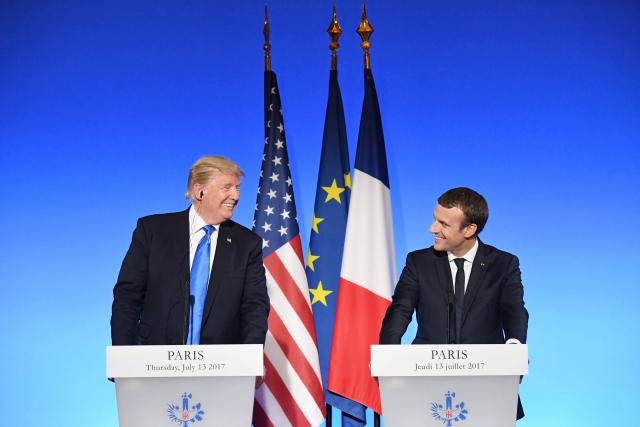 Trump made a point to say the two men are friends, giving Macron a quick pat on the arm during the remarks. Macron later added that, this evening, they would be attending a dinner together as friends.

Brigitte Macron also took Melania Trump on a tour of Notre Dame cathedral where the American first lady appeared to stop for a prayer and they then took a boat tour up the river Seine. The US first lady visited the Necker children’s hospital in Paris earlier in the day, where she spoke to children in French. 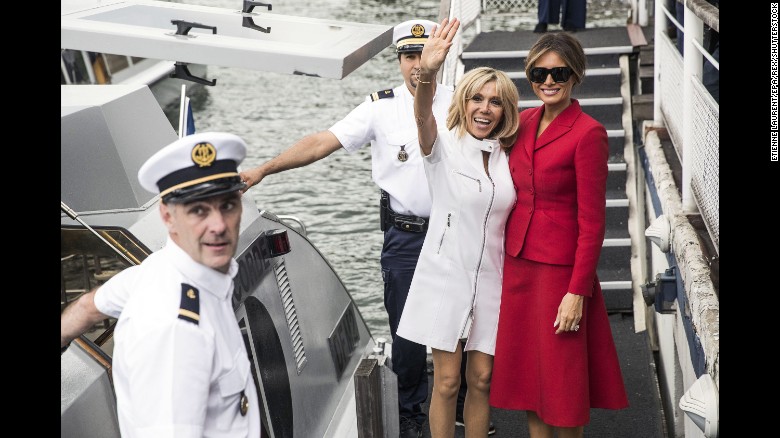 Instead of dining at the Élysée Palace, Macron and his wife, Brigitte, invited the Trumps to eat a meal cooked by the chef Alain Ducasse in a restaurant at the top of the Eiffel Tower. 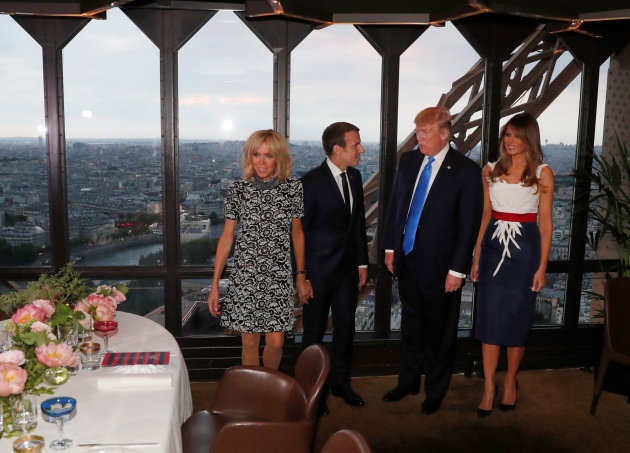 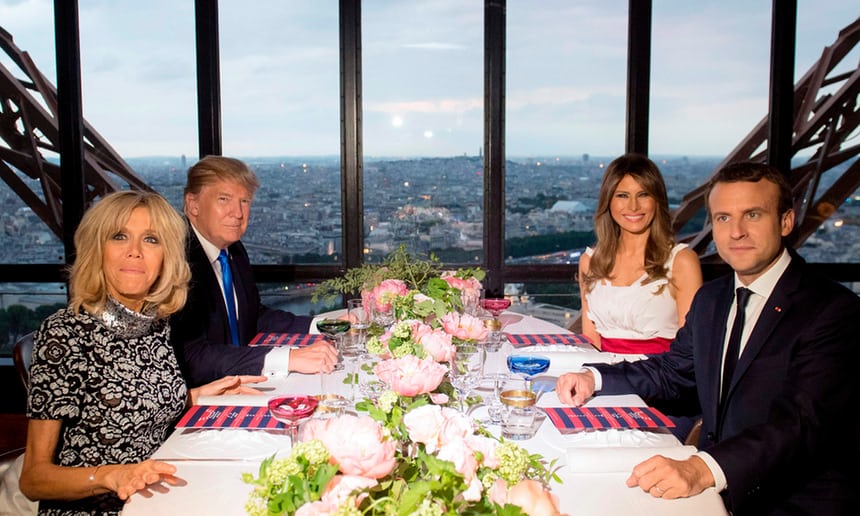 The foursome dined together later on Thursday evening at the Eiffel Tower and on Friday morning attended the annual Bastille Day parade on the Champs Élysée, this year commemorating the 100th anniversary of the American entry into World War I, before the Trumps return to Washington.