Giorgio Armani is, for the past several decades, one of the most important Italian Fashion Designers.

Giorgio Armani, Sean Penn Team Up for L.A. Photo Fair
“Sean’s work is perfectly in line with the Acqua for Life program, so joining forces was a natural step. Our great understanding and mutual respect have made this collaboration a truly gratifying experience.”

Armani spent his childhood and adolescence in Piacenza, and then attended for two years the Faculty of Medicine of the University of Milan, he abandons studies to work as a buyer for La Rinascente and as assistant photographer. Later, he accepts a job in a promotion office of a fashion agency, where he was able to come in contact with quality products and the Milanese fashion universe. Not long after, in 1964, Armani, without any professional training in the field, draws the men’s collection of Nino Cerruti and become over time a freelance consultant and fashion designer.

The fashion designer starts to get several hits and so decides, in 1975, to open is own fashion house: Giorgio Armani spa. Launches a ready-to-wear line for women and men characterized by unstructured jackets and revolutionary silhouette. The Armani men’s jackets occur free from formal constraints, full of charm and capable of giving an informal touch to the Armani man, offering a feeling of wellbeing and comfort. An style proposed by Armani is unmistakable, refined and elegant, but at the same time suitable to everyday life, which seems inspired by the black and white movies, and the American atmosphere of the twenties and thirties. Clean cuts and shades of cold colors: beige, gray and greige, a new shade somewhere between gray and earthy sand, and especially the blue-Armani. Another inspiration for Armani has always been the Arabic and oriental culture: evident in mandarin collars and ìsimilar to djellaba coats. Even the Armani Home collection is made with prints inspired by Islamic architecture, in addition to the Ming and Qing porcelain.

As for the movies, in the 80s Armani has designed the costumes for Richard Gere in American Gigolo. In 2008, has made the clothes worn by Christian Bale in the film The Dark Knight, and then in 2012 in The Dark Knight – The return. Other collaborations have been to Phenomena (1985), The Untouchables (1987), Cadillac Man (1990) and Ransom – Ransom (1996). In 2013 as Michael Fassbender and Penelope Cruz in the film The Counselor – The prosecutor and Leonardo Di Caprio in The Wolf of Wall Street.

Sport, Giorgio Armani designed the divided capital of the Chelsea English team and the English national football team. In 2012 he made the uniforms of the Italian national team for the London Olympics. Armani becomes the main sponsor of the first basketball team Olimpia Milano, and a few years later, in 2008, he takes over the property. Initially the team was known as Basketball Olimpia EA7 – Emporio Armani Milano and the 2011-12 season sponsorship Armani Jeans has been replaced with the brand EA7 – Emporio Armani.

A style in private life, as well as professional, always dictated by the refusal of the excesses, targeted to the work ethic and merit, also supporting social campaigns, such as that of RED with Bono, or Aqua for Life and aid to the people of Haiti. King George, as it is often called, is a master of elegance, charm and sophistication. 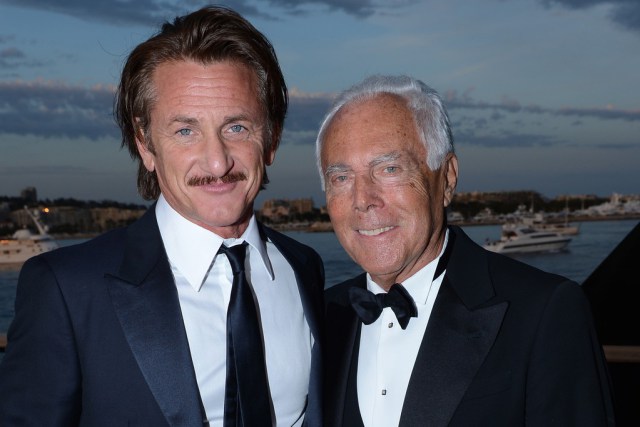